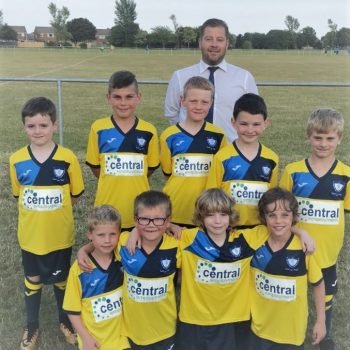 Central Employment are proud to announce that they have sponsored Whitley Bay FC PSG u9’s for the coming season.

Steve Hart, Director at Central Employment, used to play with the teams manager Tony Fawcett and when Tony approached him and told him the teams back story, he had no hesitation in sponsoring the group of players. “ I have known Tony for a number of years and he is a great coach. He lives and breathes football and having watched him coaching the kids in a couple of session you can tell they are willing to listen, learn and develop. Having played football since an early age I appreciate the enjoyment the game brings and the long term friendships that can be made by being part of a team. If sponsoring the strips and training tops gets these lads into sport now, then hopefully they will keep involved for many years”

Manager Tony Fawcett told us how the team came about…..

“My son wanted to play football so I started a free camp on a Sunday morning at Churchill. I sent letters out to my sons school and we got kids from year 1-4 turning up, boys and girls. I used the seniors cones and bibs and just got them enjoying it. Before long there was enough to form a team and we gave it a go. We used to lose heavily, I remember being 10-1 down in their first game going in to the last quarter and coming back to lose 10-9.

We lost games 25/30-0 regularly. By the time the end of last season came around they had sussed 5 a side and were winning lots of games. We went to a festival where we played 4 games, won 3 and drew 1 and only conceded 1 goal.

The biggest thing I take away from all of this is that some of the lads have confidence issues. The team environment has help these lads develop that confidence and self-esteem which you can see improving every week. It proves that sometimes it’s more than just the football for certain Individuals.

This year the team move from 5 a side to 7 a side so we have brought in a couple of players who are new to football and I look forward to seeing them improve over the season”.